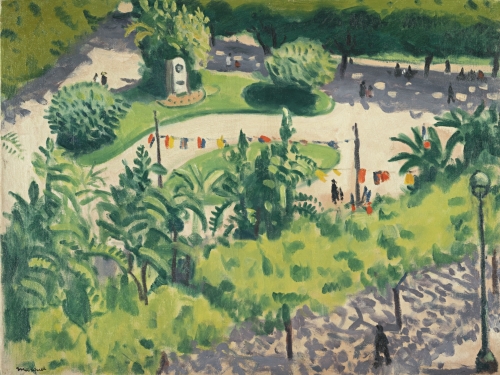 The Nahmad Collection is pleased to contribute to Marquet. La Méditerranée d’une rive à l’autre. Though the Mediterranean in Marquet's work has already been examined academically, it has never been presented in its totality as a major theme pervading all the artist’s œuvre.

The works made on the French Mediterranean coast or in the Bay of Algiers are notable because the artist regularly frequented these areas throughout his life. As such, they are regularly presented in exhibitions dedicated to the artist much in the same way that a more limited number of works produced in Italy, Tunisia and Morocco have been shown. At the same time, works made in Egypt, Turkey Greece, Albania, Dalmatia and Spain, which are less present in museums, but well-represented in private collections, remain largely unknown to a broader public.

By illustrating the artist’s production in this part of the world, the exhibition offers an overview of the close ties that have united Marquet with the Mediterranean. A Mediterranean to which he returned ceaselessly, finding in it that essential element that presided over the majority of his work: water. And beyond the water, the landscapes that line it, the windows behind which he settled to paint them, the journeys that led him from one bank to another.

For more than forty years, the Mediterranean and Paris—where the artist lived— remained some of his greatest sources of inspiration. Around these two locations, he would develop a homogeneous œuvre of great evocative power, in which “periods” so often used to demarcate sections of an artist’s production are strangely absent.
The works assembled here, which come from French and foreign museums and private collections—many rarely exhibited—attest to the extreme diversity of the maritime landscapes to which Marquet devoted so much effort.